Back to News page

Singapore, 17 February 2022 - Horizon Quantum Computing, a Singapore-based company providing software development and deployment tools for quantum computing applications, is to become a node on the National Quantum-Safe Network announced by the National Research Foundation, Singapore, and the National University of Singapore (NUS). Horizon commits to supporting research and experimentation over the network that could build the foundations for a future quantum internet.

The signing of a Memorandum of Understanding (MoU) between NUS and Horizon Quantum Computing will contribute to close collaboration between academia and industry for the quantum-safe communications network. The new National Quantum-Safe Network will deploy commercial quantum-safe technologies for trials with government agencies and private companies, conduct in-depth evaluation of security systems, and develop guidelines to support companies in adopting such technologies. Initial plans for the deployment are for 10 network nodes to be installed across Singapore. The nodes will be connected to provide a public network that can act as a living lab for organisations wanting to experience quantum-safe communication technologies, and separable government and private networks trialling dedicated users’ applications.

Horizon Quantum Computing will support proofs of concept and testbed activities for the development, exploration and translation efforts of this network. Moreover, the collaboration extends beyond quantum-safe communication and encompasses research collaboration opportunities in more general quantum communications and quantum internet applications.

“As a company focused on enabling users to create and deploy quantum applications, ensuring this can be done without compromising the privacy or integrity of those applications is a key concern for Horizon,” says Joe Fitzsimons. “Data having to cross international borders or to be stored and processed on off-premises equipment in unencrypted form can limit commercial use cases of quantum computation. We see our collaboration with NUS and our participation in quantum communications experiments in Singapore as an important step towards developing the secure computing capabilities that will ultimately be necessary to fully unlock the potential of cloud-based quantum computing.”

“Start-ups are a powerful force to deliver innovation to the world. We are glad to count Horizon Quantum Computing among our collaborators in the National Quantum-Safe Network, working towards the goal of delivering advanced cybersecurity for critical infrastructure and companies handling sensitive data,” said Alexander Ling, who is an Associate Professor in NUS and Director of Singapore’s Quantum Engineering Programme, from which the network initiative will receive $8.5 million over three years.

The company was founded in 2018 by Dr Joe Fitzsimons, an expert in the space of quantum computing applications. Dr Fitzsimons has over 16 years of experience in quantum computing and computational complexity theory and holds a doctorate from the University of Oxford on quantum computing architectures. The leadership team also includes Dr Si-Hui Tan, Chief Science Officer, who holds a PhD in Physics from MIT and has been actively involved in quantum research for 16 years.

Our CEO, Dr Joe Fitzsimons, explains in the video below: 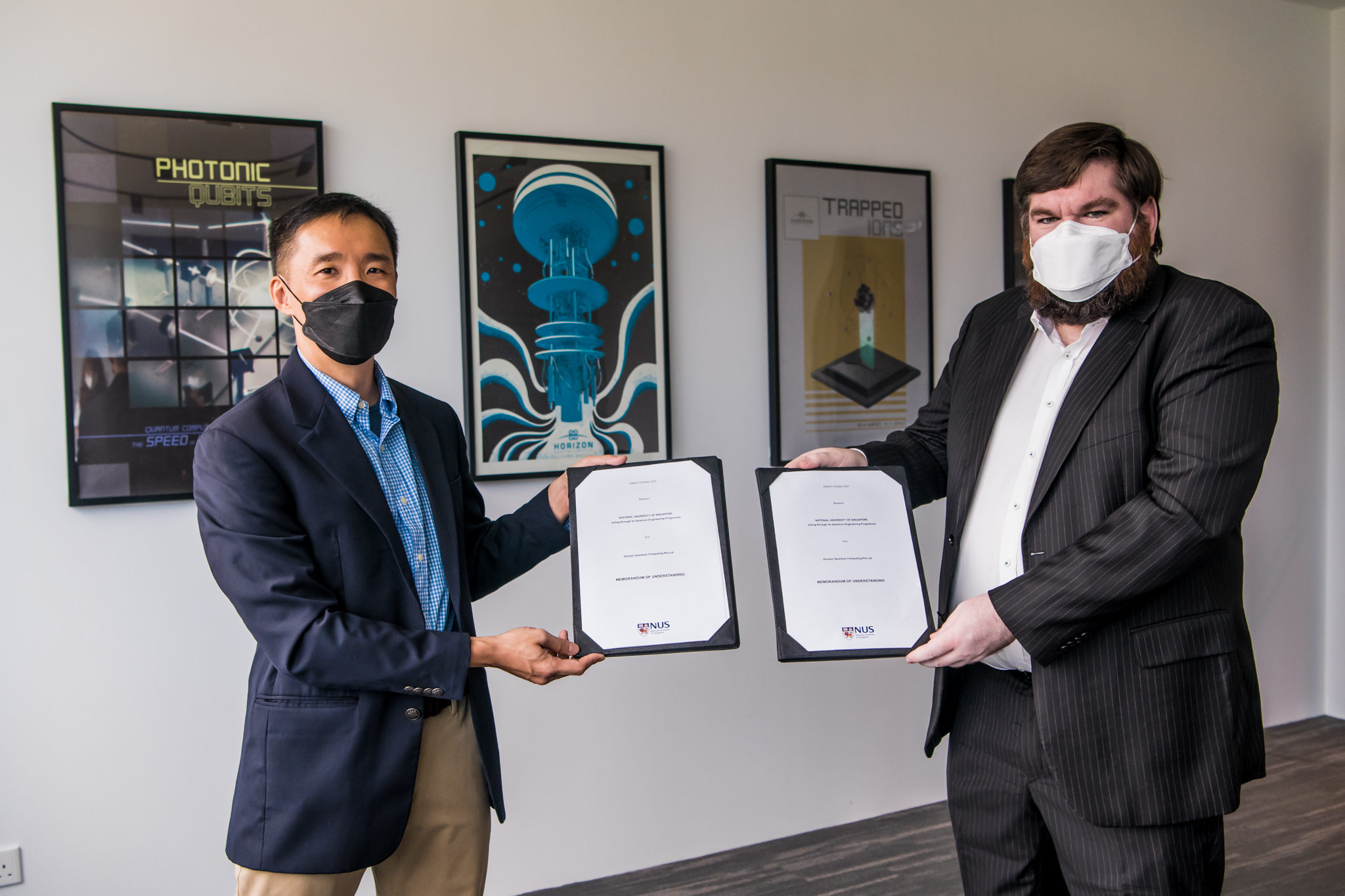 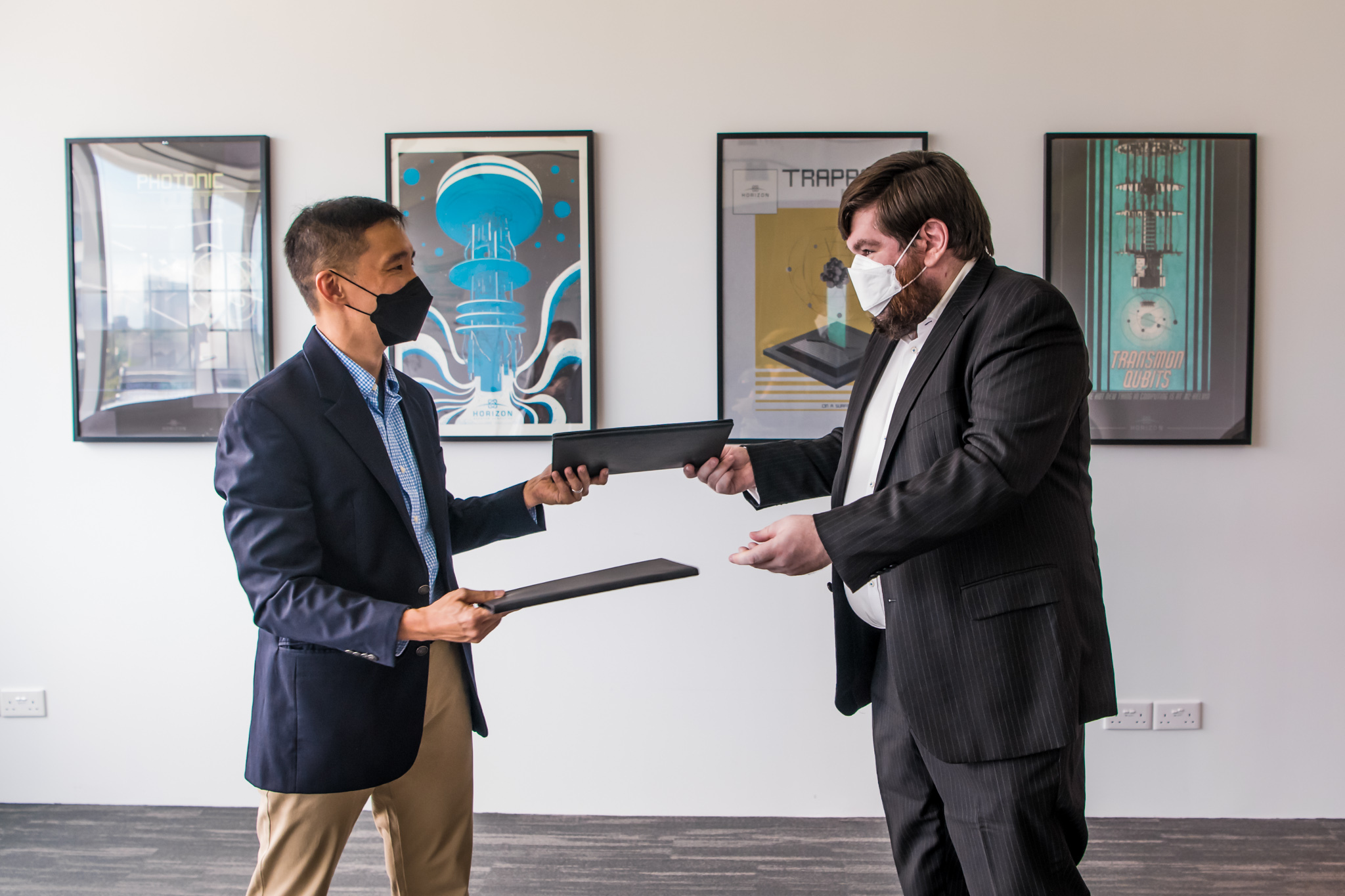 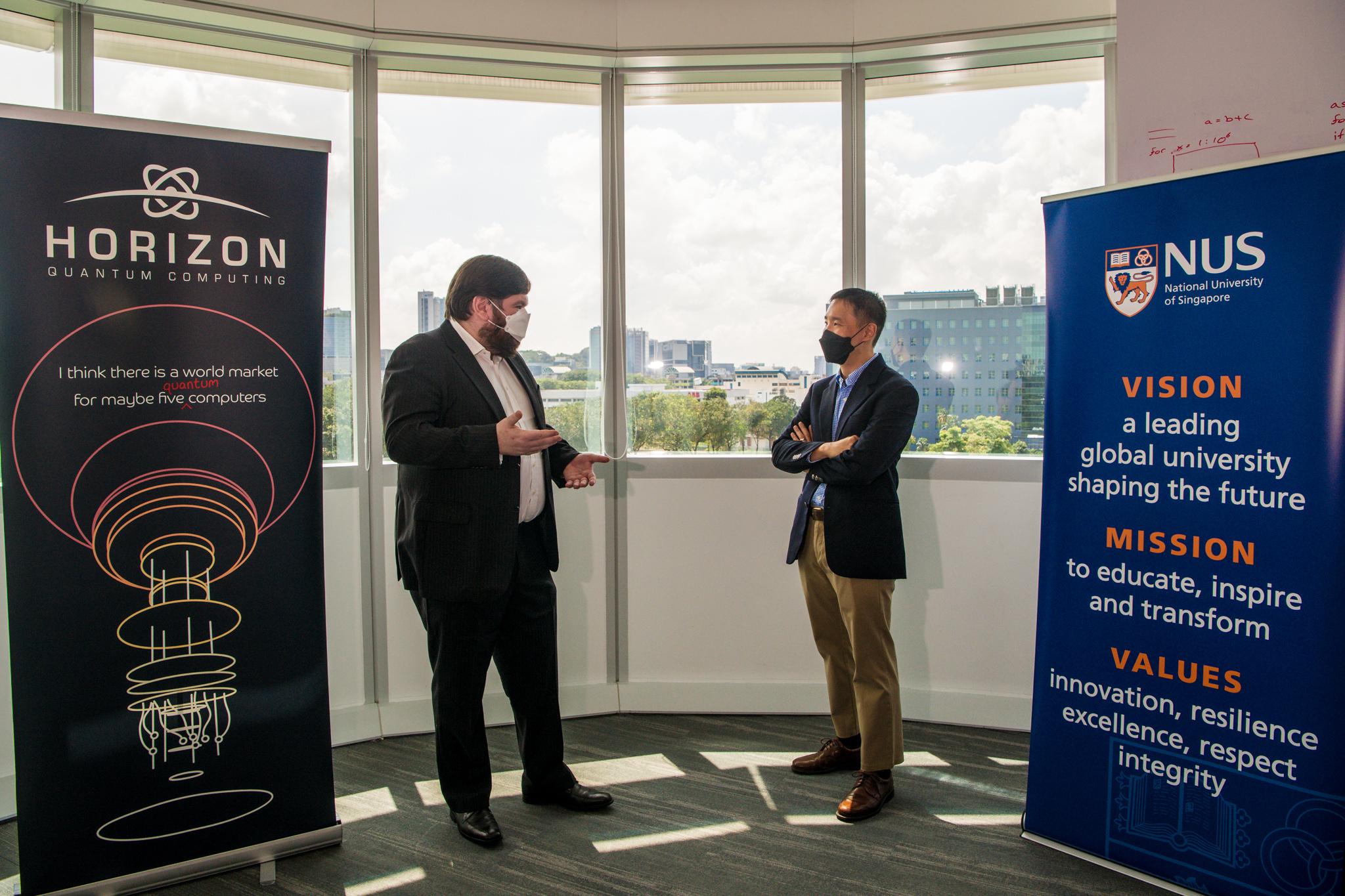 Horizon Quantum Computing, a Singapore-based company providing software development and deployment tools for quantum computing applications, is to become a node on the National Quantum-Safe Network (NQSN) announced by the National Research Foundation, Singapore, and the National University of Singapore (NUS).

If you are a journalist and want to get in touch with us, feel free to send us your media inquiries.

​​What good is a newborn baby? Quantum tech is in its infancy, but industry watchers see plenty of potential

Singapore’s great quantum quest makes the cover story of The Business Times. Our CEO Joe Fitzsimons, who was interviewed for the article, speaks about the fast development of the technology: "Year by year, month by month, even week by week, progress is made in the field."

Want to know more?
Go to our News page

​​What good is a newborn baby? Quantum tech is in its infancy, but industry watchers see plenty of potential

Singapore’s great quantum quest makes the cover story of The Business Times. Our CEO Joe Fitzsimons, who was interviewed for the article, speaks about the fast development of the technology: "Year by year, month by month, even week by week, progress is made in the field."

In an interview for TechHQ, our CEO Joe Fitzsimons talks about the potential of more structured quantum algorithms over NISQ variational algorithms.

Horizon Quantum Computing announces its plans to set up its European office in Ireland.

Our CEO Dr Joe Fitzsimons shared in an interview with The Irish Times about the factors that made Horizon choose Ireland for our first overseas office.

Read in The Irish Times

Read in The Irish Times

Horizon Quantum Computing is building an IDE that will help developers who are proficient in languages like C and C++ to build quantum apps.

Read on The New Stack

Read on The New Stack

As part of its 20th-anniversary celebrations, the Singapore Businesses Federation launched the book ‘20 Conversations’. Deputy Prime Minister Mr Heng Swee Keat was the guest of honour at the event along with the attendance of 100 business leaders, trade associations and chamber leaders.

The 6th edition of the Q2B Conference will be held in Silicon Valley, California from 6 - 8 December, 2022.

Singapore sets the pace for quantum computing in Southeast Asia

Tech Wire Asia caught up with Dr Si-Hui Tan, Chief Science Officer at Horizon Quantum Computing at the ATxSG summit to get her views on the industry, from the technology to the talent development in the field.

Horizon’s CSO Dr Si-Hui Tan was on CNA to explain key concepts of the technology, talk about its potential for industries, and highlight Singapore’s position in the quantum computing race.

Blind Quantum Computing: A Possible Solution to the Cloud versus On-Premises Dilemma

Relying on cloud-based hardware presents a number of barriers to industry adoption of quantum computing. A Quantum Computing Report article discusses how blind quantum computing may help overcome these barriers and highlights Horizon’s contribution to this technology.

How Horizon plans to bring quantum computing out of the shadows

Breakthroughs in quantum computing keep coming – the latest quantum processor designed by Google has solved a complex mathematical calculation in less than four minutes; the most advanced conventional computers would require 10,000 years to get to an answer. Here’s the problem though: even as scientists perfect the quantum computing hardware, there aren’t many people with the expertise to make use of it, particularly in real-life settings.

As quantum computers become ever more powerful, how can we be sure that the answers they return are accurate? A team of physicists, including Horizon’s CEO Joe Fitzsimons, have developed a new method to use one unreliable quantum processor to verify another and implemented it on five different quantum processors.

AWS Summit Online ASEAN: A sneak peek into the future with Quantum Computing

As shared by Dr Werner Vogels, CTO of Amazon, 2021 will be the year when quantum computing will start to blossom, and Singapore is at the forefront of this exciting field. In this session, Michael Brett, Principal Specialist at Amazon Braket, welcomes our CEO Dr Joe Fitzsimons who introduces Horizon’s classical to quantum toolchain and explains how Horizon is leveraging Amazon Braket to build solutions that have the potential to revolutionise other industries.

Singapore, a skyscraper-laden, tropical paradise known for its business-friendly policies. With the second-highest GDP per capita (PPP) in the world, it’s no wonder this island city-state — one of the Four Asian Tigers — has some of the most innovative startups in the world. This goes for startups in the quantum tech ecosystem, too, with a handful so far founded within the last half a decade.

Read on The Quantum Daily

Read on The Quantum Daily

The Straits Times: International Day of Women and Girls in Science

Dr Si-Hui Tan had already developed a keen interest in mathematics and science in secondary school. From Raffles Girls’ School she went on to pursue advanced mathematics and a degree in physics, and eventually earned herself a post-doctorate degree in physics at the Massachusetts Institute of Technology (MIT). Today, the 40-year-old is the chief science officer at a local start-up, Horizon Quantum Computing. The company aims to make quantum computing more accessible to software developers.

Read on The Straits Times

Read on The Straits Times

This new approach doesn’t require any communication between the client and server once the data has been passed off, while providing some data security for a variety of quantum computations. The study was conducted by Jonas Zeuner, Ioannis Pitsios, Si-Hui Tan (Horizon's CSO), Aditya N. Sharma, Joe Fitzsimons (Horizon's CEO), Roberto Osellame and Philip Walther.

Want to know more?
Go to our News page

Stay up to date

Stay up to date on the latest news and developments by signing up for our newsletter.